Funny question! Answers should be entertaining! The last thing I ate was a “Flake Crab” salad using imitation crab. So “my cat” will be either Flake Crab, Crabby, or Flakey. My dad would have loved the name Flakey, but not the cat. Then I will send her to live with my younger son because he likes kitten waaaaay better than me and posts pictures of himself and his cat daily! Maybe he is less allergic than I am, LOL! I’m guessing Flakey would not mind sharing this with me EXCEPT I added a bit more cayenne to the dressing this time for a nice kick!!

Mmmmm. I’m getting hungry again! This was an extra large salad for two. Tom loved it. It was so pretty, I just had to take a picture of it sitting on my counter! 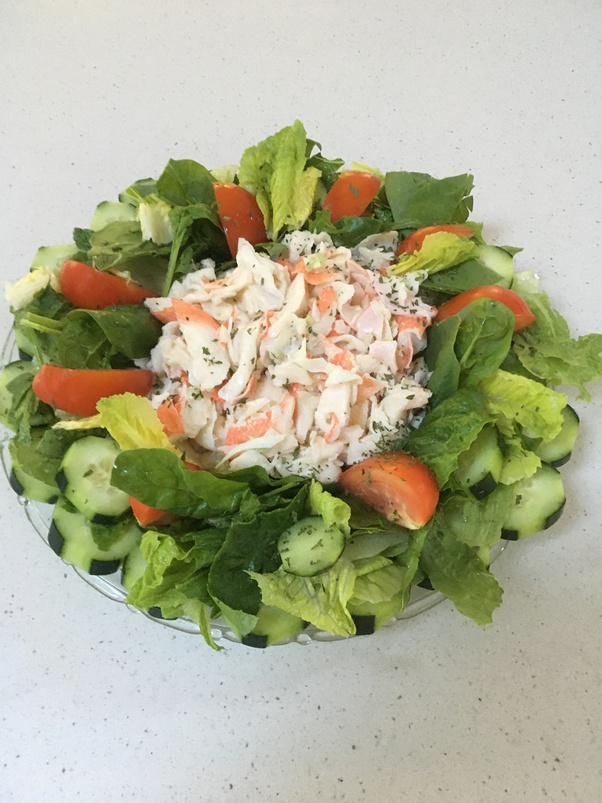 Because food should feed the senses as often as possible; the spirit and soul as well as the body!

Oh well! If Flakey thinks it’s too spicy, I can always share with Adam! I bet I could deliver his new cat and this salad at the same time and he would be perfectly happy!

Well, this hypothetical cat is pretty lucky. His name is vanilla bean! Ice cream of course. Not a bad name for a cat at all. I think he’d be Mr. Bean. A tuxedo cat for sure.

That name makes me think of a tuxedo guy I met a couple of years ago. Poor dude. Beautiful cat. Lovely coat, very well cared for. His people had been an elderly woman who could no longer care for him. Her family couldn’t take him but contacted a local rescue and surrendered him with full information.

He had only one problem. He was blind. His eyes were not clear and sparkling as they should be, but dark and clouded over. His problem? His diet.

His owner had carefully cooked food for him, chicken and fish. Everyday lovingly cooked for him. His diet was deficient in taurine. So he’s blind.

We felt we couldn’t take him, we had two active kitten and felt that plus new people would be too much. He was adopted by an nice couple as an only cat.

In any case, there may be a Mr Bean in my future. I like it!

Chex! LOL I just had a bowl of Rice Chex. It’s not usual for me but I’ve been gardening all day and I’m too exhausted and it’s too hot today to cook anything much for dinner.

Actually that would be a pretty cute name for some cats. I’ve owned a tiger or two that were kind of checkered in their markings. While I am NOT in the market for a new cat, I’ll have to make a note of that should another stray tiger cat show up and adopt me. Which hasn’t happened in a while…. uh Knock wood! Now I’m nervous. I really don’t need another cat right now, we’re all full up on critters. Which means I’m due for a cat blessing!

Well that’s not an odd name for a cat at all.

Dorado — ranch flavour with French onion dip. Sounds like it will have to be a him.

Original question: You get a cat and the last thing you ate is what you have to name it. What is your cat’s name?

Well, the last thing in my meal would be tea or milk but those are things to drink rather than munch. I’ll go with apple pie.

Now what should I call the cat> Apple -> app. Hmmm. sounds like that cat could become a techno-nerd. May pass on that.

Let’s go with the pie part Pie? Pied? No. How about pye? Maybe Pyewacket? Then we could get it a bell, book and candle and make a movie.

I have never named a cat after something I ate. My daughter named one if her’s Greenbean, because he loved to eat them off the vines in the garden.

Doesn’t really roll off the tongue though.

That’s cute. I usually give my cats people names, but Chia-for-short absolutely works.

Well, have already used it as a nickname for one of my past cats. This is Queen Victoria Grey when she was about 17. She made it to 17 1/2. 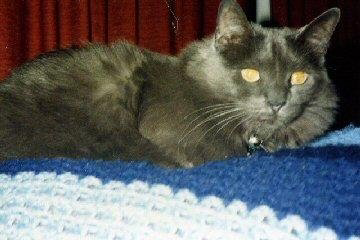 Victoria loved roast pork so much, she would lay in front of the oven until the roast was ready and she got her couple of tablespoons of diced pork.